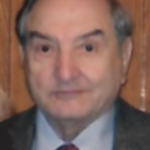 Angelo Joseph Corsi, age 95 of Morrisville, PA, passed away peacefully on Thursday, December 22, 2022, at St. Mary Medical Center, Langhorne, PA. with his family by his side.

Born in and raised in Philadelphia, Angelo lived in the Morrisville/Yardley area for the past 27 years.  Angelo was a young apprentice at a tailor shop in Philadelphia. Later he became a proud Veteran of the United States Army during World War II, he attained the rank of Corporal.  He worked for the Department of the Navy, starting in 1952 at the Naval Air Development Center in Northeast Philadelphia. Additionally, he was employed with RCA for over twenty years as a computer programmer, working in Camden, New Jersey and New York City, with special assignments in California, Brazil and Australia.

A former parishioner at St. Rita Roman Catholic Church in Philadelphia, he was fond of listening to classical music and operas.  In his spare time, he enjoyed building computers, creating mathematical visualizations (fractals) and was an avid Philadelphia sports fan, rooting for the 76er’s, Phillies, Eagles and Flyers.

Son of the late Aniello and Giovannina (Santostefano) Corsi and father of the late Andrew and Augustine Corsi, he is survived by 5 children, Stephen Joseph Corsi of Morrisville, PA, Ann Elizabeth Chubb of Bristol, PA, Joanne Amelia and David B. Pendleton of Trappe, PA, Caroline Virginia and Ronald Williams of Warminster, PA and Charlotte Mary and William Fitch of Fairless Hills, PA, 7 grandchildren, Emily Ann Chubb, Rebecca W. and Drew Potter, Sarah C. Nem, Nicholas and Catherine Williams and Christopher Michael and Andrew Joseph Pendleton, a great grandson Jordan A. Caruso, a niece Cynthia C. Fenimore and two nephews Neil and Gerald Corsi. He was preceded in death by his brother Jerry Corsi.

Relatives and friends are invited to gather at 11:30 AM and celebrate his Funeral Mass at 12:30 PM on Tuesday, January 3, 2023 at St. John the Evangelist Roman Catholic Church, 758 Big Oak Road, Morrisville, PA  19067.  His interment with Military Honors will begin at 2 PM at Washington Crossing National Cemetery, 830 Highland Rd., Newtown, PA  18940.

In lieu of flowers, memorial contributions, in Mr. Corsi’s name, may be made to the Wounded Warrior Project (www.woundedwarriorproject.com) or the Alzheimer’s Association (www.alz.org).

To send flowers to the family or plant a tree in memory of Angelo Joseph Corsi, please visit our floral store.