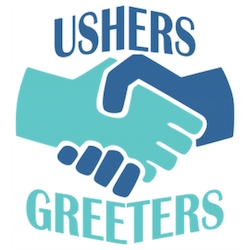 Greeters are a group of dedicated people who welcome everyone as they enter the church.  They are the gatekeepers in the House of the Lord; the envoy of the Lord of the House. Their very presence is the first living impression of the church body. This welcoming ministry is designed to make all first time guests and members feel welcome.  This includes but is not limited to warm greetings, assistance with doors, coats, umbrellas in the rain, parking,  and sharing information about church activities,

Ushers seat people, take up the collections and assist people in coming up to receive Holy Communion.  They are available on special occasions such as First  Holy Communion, Confirmation, large church functions, and holiday liturgies to keep everything running smoothly.  If a problem arises, it is usually an usher who is there to see what is needed and to quietly provide it.  They are very special helpers in the vineyard of the Lord.  We are always looking for new members to join us.  The most important qualification to become an Usher is a desire to help others and this ministry is open to any man, woman or teen belonging to our parish.

Noble layman; friend and counselor to the king, he was married to a wealthy widow. A stag he was hunting predicted he would kill his own parents. Julian moved far away to avoid his parents, but they found him and came to make a surprise visit. His wife gave them her and Julian’s bed; Julian killed them, thinking they were his wife and another man.

As penance, he and his wife traveled to Rome, Italy as pilgrims seeking absolution. On his way home, to continue his penance, Julian built a hospice beside a river, cared for the poor and sick, and rowed travelers across the river for free.

Once, after having helped many, many travelers, Julian gave his own bed to a pilgrim leper who had nearly frozen to death. When they had him safely settled, the man suddenly revealed himself to be an angel. The visitor announced that Christ had accepted Julian’s penance; the angel then disappeared.

Immensely popular in times past; scholars today think the story is likely to be pious fiction, mistaken for history.