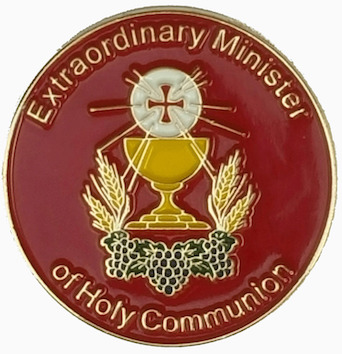 Extraordinary Ministers of Holy Communion assist the priest in distributing the Body and Blood of Jesus Christ at Mass. They also serve the Parish Community by bringing the Holy Eucharist to those members of the parish who are unable to attend Mass due to illness or disability, the homebound, and residents of the nursing home facilities for which the parish is responsible.

In answering the call to become a Eucharistic Minister, a person directly participates in sharing the mystery of God’s love with his neighbor, either with other members of the community at Mass, or with those who suffer from illness, infirmity, or loneliness and need Christ’s loving presence brought to them.

Those involved in this ministry often feel joy and fulfillment much greater than any effort or sacrifice they make. Eucharistic Ministers usually serve for a 3-year term, but longer or shorter periods are common.

A brief training session is required and members are asked to attend any meetings if determined necessary by the Pastor.  Eucharistic Ministers may be scheduled for Mass or visits to the nursing home according to their wishes, either frequently or a few times per year.

A tradition dating from the sixth century says that St. Tarcisius was an acolyte whose fidelity and courage so impressed the leaders of the Church during the persecution of Valerian that he was entrusted with taking the Blessed Sacrament secretly to the Christians who awaited martyrdom in prison. This custom arose when the priests who ministered to the prisoners would be easily discovered, while the acolytes were less known to the heathens.

The Roman Martyrology, based on the fourth-century poem of Pope St. Damasus, gives the story of the “boy martyr of the Eucharist” in these words: “At Rome, on the Appian Way, the passion of St. Tarcisius the acolyte, whom pagans met carrying the sacrament of the Body of Christ and asked him what it was he was carrying. He deemed it a shameful thing to cast pearls before the swine, and so was assaulted by them for a long time with clubs and stones until he gave up the ghost. When they turned over his body, the sacrilegious assailants could find no trace of Christ’s Sacrament either in his hands or in his clothing. The Christians took up the body of the martyr and buried it with honor in the cemetery of Callistus.”

In his poem, Pope Damasus compares St. Tarcisius with St. Stephen who was stoned by the Jews, and praises the martyr for suffering a cruel death rather than surrender “the divine Body to raging dogs.” The body of St. Tarcisius was most probably laid to rest with those of Pope St. Zephyrinus and others in the Basilica of St. Sixtus and Cecilia, but at present, it is said to be in the Church of San Silvestro in Capite.

St. Tarcisius is venerated as a … an example of loving and heroic devotion to our Lord in the Holy Eucharist.