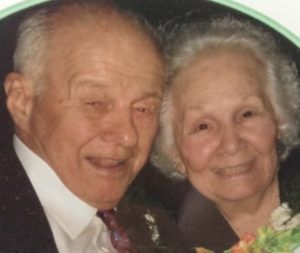 Robert G. Rinkus passed away on Thursday, July 16th. He recently mourned the loss of his beloved wife Alberta and now he is with her again. Robert was born at his childhood home on East Diamond Avenue in Hazelton PA on September 29th, 1924. He was predeceased by his loving wife Alberta who he constantly protected these past 71 years. He is also predeceased by his parents, John and Agnes Rinkus and his older brother Alvin Rinkus of Garden City NY.
He was a proud veteran of the US Navy serving in World War II as an electrician.  He was stationed in England during his service. After serving, he attended Penn State University on the GI bill and obtained his Bachelor of Science degree in Electrical Engineering.
Robert spent most of his career working for US Steel at the Fairless Works plant. He also worked for Allstate Engineering. He was a very industrious man who often worked two jobs to support his large family of seven children.  He devoted his life to his wife and children and spent his retirement years caring for many of his grandchildren. He often remarked that he should pay us for this entertainment because he was having so much fun!
Robert is survived by his seven children Robert (BethAnn), Richard (Linda), John (Alicia), Joseph (Doreen), Michael, his constant caregiver, Suzanne Bancroft (Douglas), and Frances Girton (Edward.) He is also survived by his 13 grandchildren and 15 great grandchildren, his many nieces and nephews too numerous to mention here.
He loved his family and was a devout and faithful Catholic. He would hope that all of you say a prayer for him and pray for our country’s leaders too. He was a true character who always had a story to tell us or something to teach us. He was active on Facebook and even had a LinkedIn page at the age of 95. During his latest years he spent long hours on the Ipad mostly reading and learning new things. He also spent time carving and painting wooden ships for his grandchildren. He would carve each of them a ship and on the bottom,  he would fix the following statement: May you sail through life on a calm, gentle sea and the ports where you visit be friendly to you. Let our dear Lord navigate your way. The course will be true for your ship and your crew. He was a remarkable man and he will be sorely missed by all.

Family and friends will be received at St. John the Evangelist Church 752 Big Oak Rd #4728, Morrisville, PA 19067 on Monday August 3, 2020 from 10:00 am to 11:00 am with his Funeral Mass to be celebrated at 11:00 am. His interment will follow the mass in Washington Crossing National Cemetery. In lieu of flowers contributions in Roberts memory may be made to St. John the Evangelist Church at the above address.