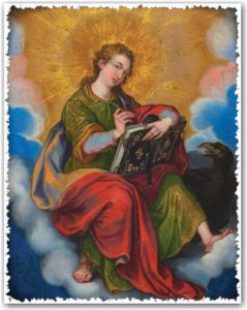 Empowered by the gifts of the Holy Spirit and transformed by the Eucharist into the Body of Christ, the people of Saint John the Evangelist Parish are called to be ambassadors of Christ. We strive to reach out and encourage others to join us in Christ’s Church. Then, together as one Catholic family, we live a reverent and active sacramental life, provide strong programs of religious education for youth and adults, embrace our apostolic mission of joyfully proclaiming the Gospel and generously share God’s gifts for the good of others.

About Our Patron, St. John the Evangelist

John was one the twelve apostles who followed Jesus. He was the son of Zebedee and Salome, and the brother of James the Great, another one of the twelve. His father was a fisherman of Capharnaum, who with several employees fished in Lake Galilee. His mother, Salome, became one of the holy women who followed Jesus, along with Mary Magdalen.

Both John and his brother James were followers of John the Baptist at first, but later became disciples of Jesus. John was probably the youngest of the twelve apostles, and called himself later the “disciple whom Jesus loved”. Both John and his brother had a fiery nature, so Jesus called them the “sons of thunder.” Among the twelve he held a special place: With Peter and James he witnessed the Transfiguration and the Agony at Gethsemane; he was the only one of the twelve who stood at the foot of the cross, when Jesus died. And finally, Jesus charged him with the care of His mother.

After Christ’s death John stayed in Judea and Samaria for a while, and was one of the pillars of the early Church. Tradition holds that he moved to the city of Ephesus, with Mary, the mother of Jesus. From there he ministered to several Christian communities in Asia Minor. During the reign of the Roman Emperor Domitian (81-96 AD) he was exiled to the island of Patmos, where he wrote the three letters named for him, and the book of Revelations (also known as the Apocalypse). He returned to Ephesus, where he wrote his gospel (about 100 AD). He died in the year 104 AD, at an advanced old age.

John is often depicted with an eagle, in reference to the opening words of his gospel, where his ideas soar to mystical heights.