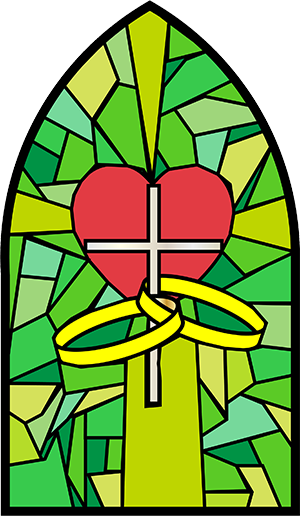 “The matrimonial covenant, by which a man and a woman establish between themselves a partnership of the whole of life, is by its nature ordered toward the good of the spouses and the procreation and education of offspring; this covenant between baptized persons has been raised by Christ the Lord to the dignity of a sacrament.”84

I. MARRIAGE IN GOD’S PLAN
Sacred Scripture begins with the creation of man and woman in the image and likeness of God and concludes with a vision of “the wedding-feast of the Lamb.” Scripture speaks throughout of marriage and its “mystery,” its institution and the meaning God has given it, its origin and its end, its various realizations throughout the history of salvation, the difficulties arising from sin and its renewal “in the Lord” in the New Covenant of Christ and the Church.
Marriage in the order of creation

“The intimate community of life and love which constitutes the married state has been established by the Creator and endowed by him with its own proper laws. . . . God himself is the author of marriage.”The vocation to marriage is written in the very nature of man and woman as they came from the hand of the Creator. Marriage is not a purely human institution despite the many variations it may have undergone through the centuries in different cultures, social structures, and spiritual attitudes. These differences should not cause us to forget its common and permanent characteristics. Although the dignity of this institution is not transparent everywhere with the same clarity, some sense of the greatness of the matrimonial union exists in all cultures. “The well-being of the individual person and of both human and Christian society is closely bound up with the healthy state of conjugal and family life.”

God who created man out of love also calls him to love the fundamental and innate vocation of every human being. For man is created in the image and likeness of God who is himself, love.90 Since God created him man and woman, their mutual love becomes an image of the absolute and unfailing love with which God loves Man. It is good, very good, in the Creator’s eyes. And this love which God blesses is intended to be fruitful and to be realized in the common work of watching over creation: “And God blessed them, and God said to them: ‘Be fruitful and multiply, and fill the earth and subdue it.'”

Holy Scripture affirms that man and woman were created for one another: “It is not good that the man should be alone.” The woman, “flesh of his flesh,” his equal, his nearest in all things, is given to him by God as a “helpmate”; she thus represents God from whom comes our help.93 “Therefore a man leaves his father and his mother and cleaves to his wife, and they become one flesh.” The Lord himself shows that this signifies an unbreakable union of their two lives by recalling what the plan of the Creator had been “in the beginning”: “So they are no longer two, but one flesh.”

Marriage under the regime of sin

Every man experiences evil around him and within himself. This experience makes itself felt in the relationships between man and woman. Their union has always been threatened by discord, a spirit of domination, infidelity, jealousy, and conflicts that can escalate into hatred and separation. This disorder can manifest itself more or less acutely and can be more or less overcome according to the circumstances of cultures, eras, and individuals, but it does seem to have a universal character.

According to faith, the disorder we notice so painfully does not stem from the nature of man and woman, nor from the nature of their relations, but from sin. As a break with God, the first sin had for its first consequence the rupture of the original communion between man and woman. Their relations were distorted by mutual recriminations;96 their mutual attraction, the Creator’s own gift, changed into a relationship of domination and lust;97 and the beautiful vocation of man and woman to be fruitful, multiply, and subdue the earth was burdened by the pain of childbirth and the toil of work.

Nevertheless, the order of creation persists, though seriously disturbed. To heal the wounds of sin, man and woman need the help of the grace that God in his infinite mercy never refuses them.99 Without his help, man and woman cannot achieve the union of their lives for which God created them “in the beginning.”

Marriage under the pedagogy of the Law

In his mercy, God has not forsaken sinful man. The punishments consequent upon sin, “pain in childbearing” and toil “in the sweat of your brow, “100 also embody remedies that limit the damaging effects of sin. After the fall, marriage helps to overcome self-absorption, egoism, the pursuit of one’s own pleasure, and to open oneself to the other, to mutual aid and to self-giving.

Moral conscience concerning the unity and indissolubility of marriage developed under the pedagogy of the old law. In the Old Testament, the polygamy of patriarchs and kings is not yet explicitly rejected. Nevertheless, the law given to Moses aims at protecting the wife from arbitrary domination by the husband, even though according to the Lord’s words it still carries traces of man’s “hardness of heart” which was the reason Moses permitted men to divorce their wives.

Seeing God’s covenant with Israel in the image of exclusive and faithful married love, the prophets prepared the Chosen People’s conscience for a deepened understanding of the unity and indissolubility of marriage.102 The books of Ruth and Tobit bear moving witness to an elevated sense of marriage and to the fidelity and tenderness of spouses. Tradition has always seen in the Song of Solomon a unique expression of human love, insofar as it is a reflection of God’s love – a love “strong as death” that “many waters cannot quench.”103

Marriage in the Lord

The nuptial covenant between God and his people Israel had prepared the way for the new and everlasting covenant in which the Son of God, by becoming incarnate and giving his life, has united to himself in a certain way all mankind saved by him, thus preparing for “the wedding-feast of the Lamb.”

On the threshold of his public life Jesus performs his first sign – at his mother’s request – during a wedding feast.105 The Church attaches great importance to Jesus’ presence at the wedding at Cana. She sees in it the confirmation of the goodness of marriage and the proclamation that thenceforth marriage will be an efficacious sign of Christ’s presence.

In his preaching, Jesus unequivocally taught the original meaning of the union of man and woman as the Creator willed it from the beginning permission given by Moses to divorce one’s wife was a concession to the hardness of hearts.106 The matrimonial union of man and woman is indissoluble: God himself has determined it “what therefore God has joined together, let no man put asunder.”

This unequivocal insistence on the indissolubility of the marriage bond may have left some perplexed and could seem to be a demand impossible to realize. However, Jesus has not placed on spouses a burden impossible to bear, or too heavy – heavier than the Law of Moses.108 By coming to restore the original order of creation disturbed by sin, he himself gives the strength and grace to live marriage in the new dimension of the Reign of God. It is by following Christ, renouncing themselves, and taking up their crosses that spouses will be able to “receive” the original meaning of marriage and live it with the help of Christ. This grace of Christian marriage is a fruit of Christ’s cross, the source of all Christian life.

This is what the Apostle Paul makes clear when he says: “Husbands, love your wives, as Christ loved the church and gave himself up for her, that he might sanctify her,” adding at once: “‘For this reason a man shall leave his father and mother and be joined to his wife, and the two shall become one. This is a great mystery, and I mean in reference to Christ and the Church.”

The entire Christian life bears the mark of the spousal love of Christ and the Church. Already Baptism, the entry into the People of God, is a nuptial mystery; it is so to speak the nuptial bath.111 which precedes the wedding feast, the Eucharist. Christian marriage in its turn becomes an efficacious sign, the sacrament of the covenant of Christ and the Church. Since it signifies and communicates grace, marriage between baptized persons is a true sacrament of the New Covenant.

Virginity for the sake of the Kingdom

Virginity for the sake of the kingdom of heaven is an unfolding of baptismal grace, a powerful sign of the supremacy of the bond with Christ and of the ardent expectation of his return, a sign which also recalls that marriage is a reality of this present age which is passing away.

Both the sacrament of Matrimony and virginity for the Kingdom of God come from the Lord himself. It is he who gives them meaning and grants them the grace which is indispensable for living them out in conformity with his will. The esteem of virginity for the sake of the kingdom and the Christian understanding of marriage are inseparable, and they reinforce each other:

Whoever denigrates marriage also diminishes the glory of virginity. Whoever praises it makes virginity more admirable and resplendent. What appears good only in comparison with evil would not be truly good. The most excellent good is something even better than what is admitted to be good.