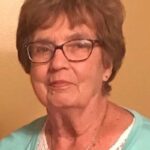 Joan Marie (VanWinkle) Jackman of Yardley, Pa passed away peacefully the morning of November 27, 2022, at Rockhill Community in Sellersville, Pa.

Joan was born in Upper Darby, Pa on January 6, 1938, where she attended St Lawrence Elementary and Villa Maria Academy High School. Joan attended Fitzgerald Mercy Nursing School prior to starting a family and completed her Nursing degree at the age of 45 at Helene Fuld, Trenton, NJ. Joan then worked as a RN in several hospitals, completing her career as a hospice nurse for Chandler Hall, Newtown, Pa.

Joan’s strongest devotions were to faith and family. She had a strong devotion to Mother Mary. From den mother to cheerleading coach to barbecue celebrations in our Rice Drive backyard, she made every attempt to be involved and make her children’s milestones memorable. Joan attended as many sporting and school events as possible for each grandchild. The family’s strongest memories are holidays at her home and vacations at the Jersey shore. Joan’s happiest time and place was the beach after the crowds had left and she could sit and watch the waves. After faith and family came friends and Philadelphia sports teams. Joan looked forward to her monthly Mahjong gatherings and school reunions with friends. Joan is a lifelong Eagles fan and became a dedicated Phillies fan, once her Philadelphia As left town.

In lieu of flowers, a donation can be made to Camilla Hall, 100 Maxis Drive, Malvern, PA 19355 or Hayden’s House of Healing (https://www.haydenshouse.org/donate).