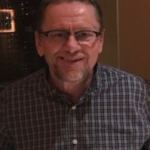 James Michael Budnick 60, a loving husband, father, son, and brother died Tuesday, March 30th at his home in Yardley, PA. He passed surrounded by his loving family. He was born and raised in Mariners Harbor, Staten Island, NY and graduated from Ralph McKee High School in 1979. He began working on Wall Street at 19 as a margin clerk for EF Hutton. He continued to work his way up for several Wall Street firms and retired in 2019 from Credit Suisse as a Vice President of Technology. In 1985, he married the love of his life, JoAnn. Everyone always said that they were the perfect couple. He played in various softball leagues while living on Staten Island and was also an avid bowler. He left Staten Island and moved to Sparta, NJ in 1988 where he raised two boys with JoAnn. In 2000 the family then settled in Yardley, PA. Jim was an avid golfer and overall handy man. He enjoyed beach trips to the Jersey shore with family & friends and fishing off the jetty in Manasquan, NJ. Jim also enjoyed many trips to Aruba and Monmouth Park Racetrack, where he had a knack for picking the winners. Jim was involved in the Pennsbury Athletic Association, as a baseball manager and coach and also Yardley Morrisville Junior American Legion. In 2017 Jim was part of the largest kidney transplant chain to take place in one hospital. Jim will be remembered as being genuine, funny, wise as well as the best father, husband, and friend to many. He is survived by his wife JoAnn (nee O’Grady) and their two sons, Dylan, & Ed Budnick, his mother, Lucille Budnick, five siblings, Mary Siragusa (Bob), Nancy Oliveri (Glenn), Lucille Cichminski (Matthew) Tom Budnick, and Kevin Budnick (Tiffanie). He is also survived by his in-laws Noreen and Brendan McMullan, Harry and Rosemary O’Grady, Vincent O’Grady and Tricia and John Corbett and many loving nieces and nephews. His father Edward Budnick died in 1999. The viewing with be on Monday April 5th at the FitzGerald-Sommer Funeral Home Yardley, PA. from 4-8 pm. The funeral mass will be held on Tuesday April 6th at 11 am at St. John the Evangelist Church, Yardley, PA. Burial will follow in Newtown Cemetery. For anyone who cannot attend the funeral you can view it on St. John the Evangelist website which is https://stjohnpa.org. In lieu of flowers, the family requests donations be made in James Budnick’s memory with a designation to the Renal Transplant Fund at Saint Barnabas Medical Center. All gifts will be acknowledged to the family. Donations can be made online at sbmcgiving.org or via phone at 973-322-4330. Checks can also be mailed to Saint Barnabas Medical Center Development Department, 95 Old Short Hills Road, West Orange, N.J. 07052.