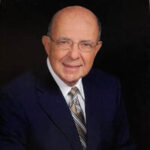 Born in Bryn Mawr PA, he later moved to and grew up in Bristol PA.

He worked for RCA Astro in East Windsor NJ and later became the Vice President of Finance for Lockheed Martin Global Telecommunication in Bethesda MD.

He is preceded in death by his parents Ida and Innocenzo Amadio. He is survived by his beloved wife Celeste of 61 years of marriage and four sons Thomas, William (Donna), David (Shelley), and Richard (Amy) He had eight grandchildren: James (Ashley), Steven, Daniel, Sarah, Molly, Michael, Lily, Calli and two great-granddaughters.

He was a long-time member of St. John the Evangelist Catholic Church in Morrisville PA where he was also a member of the Knights of Columbus and an active member of the Sons of Italy.